The AC Transit board, at its last April meeting, approved a new three-year contract with the Amalgamated Transit Union (ATU) Local 192, after it was ratified by an overwhelming majority membership vote. This comes nine months after 40 AC Transit workers and riders spoke up at a board meeting to demand hazard pay for the risk and sacrifice they endured to keep the East Bay moving throughout the COVID-19 pandemic. The new no-concession contract provides bus operators, mechanics and service workers with an “appreciation pay” bonus of up to $4,000 per worker, on top of a signing bonus of $2,000 and a 10% raise. Frontline transit workers also won retroactive relief from a punitive attendance policy that had been in force during the pandemic. This important victory demonstrates the power workers at ATU 192 have built, and the pressure that rank-and-file workers can exert when they come together to demand better working conditions and stand up for the compensation they deserve.

On December 4, 202l, 200 ATU workers, riders and other supporters rallied in front of Oakland City Hall to demand hazard pay. Rank-and-file workers had organized support for the rally at weekly meetings of ATU members, and through other organizing tactics. 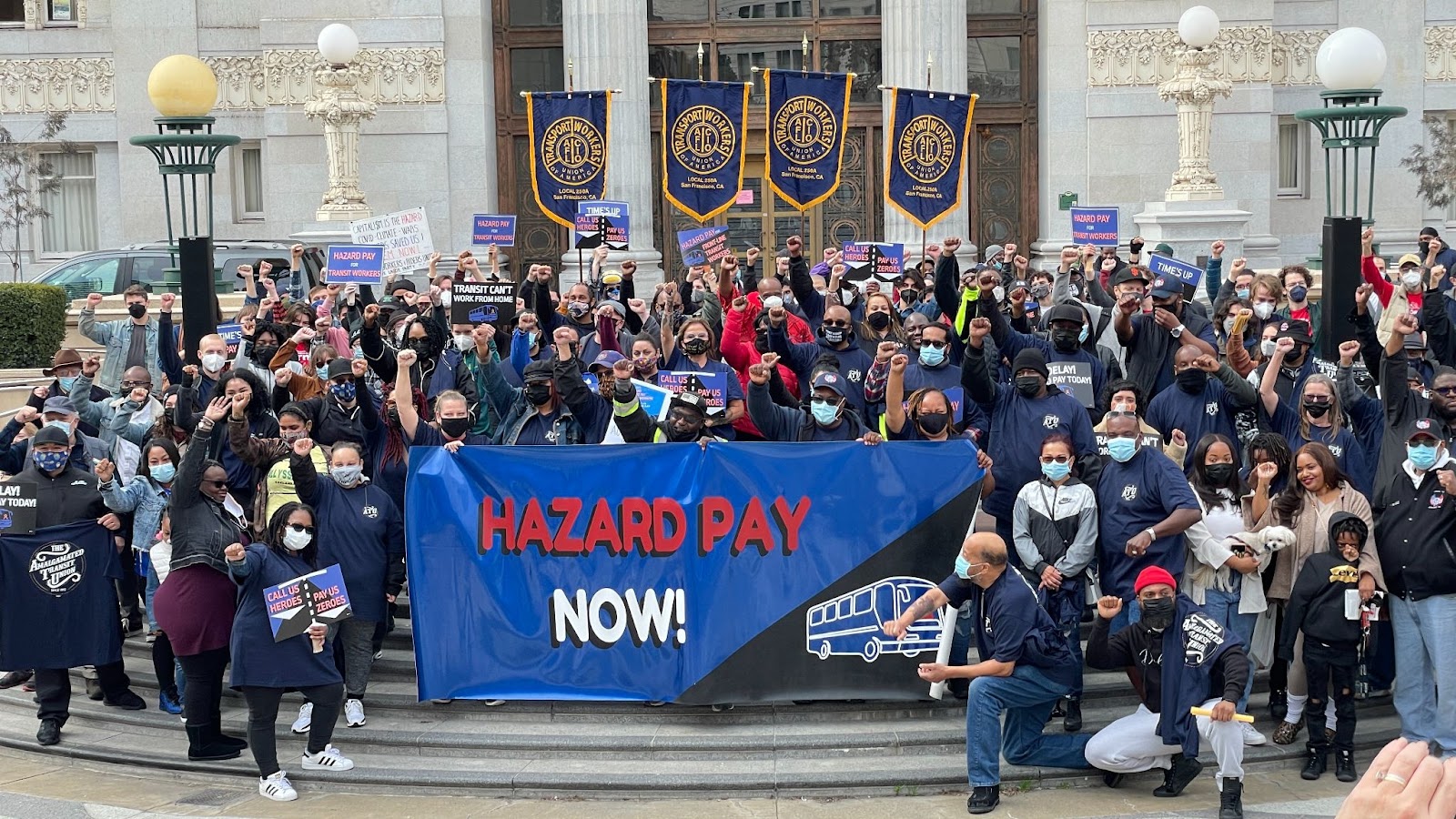 The rank-and-file organizers also drew on their community networks, turning out friends, family and other unions to stand alongside them. Speakers from ATU 265, TWU 250A (representing workers at San Francisco MUNI), ATU 1575 (Santa Clara County), and the Oakland Education Association (OEA) showed solidarity with ATU 192’s demands for hazard pay, helping to put even greater pressure on AC Transit.

But the key to success – as in the organizing that won union recognition at Amazon’s Staten Island facility in April 1 – was worker-to-worker engagement with rank-and-file members. By pairing ATU 192 workers with riders and organizers from PTA for each part of the planning process, these two groups were able to build solidarity with each other, and confidence in their new organizing skills. The rally proved to organizer and AC Transit bus operator Sultana Adams that “what we need more than anything is to continue to organize and build solidarity within our locals as well as partner with our riders,” adding that this organizing and solidarity-building was key to creating “the leverage we need to gain the power to improve our working conditions and better serve our communities.” Riders and organizers in East Bay DSA’s People’s Transit Alliance (PTA) demonstrated their solidarity with workers by supporting their rank-and-file organizing, and through the process built important connections.

The rally was the culmination of months of organizing within ATU 192, where Adams and other rank-and-file organizers won a vote of ATU’s membership to create a hazard pay campaign, turned out to board meetings, ran a worker petition for hazard pay, and phone banked their co-workers to engage them in the campaign. Transit workers also canvassed AC Transit riders at events hosted by East Bay DSA and Cal YDSA. Their new contract is the  result of this deliberate and consistent work, and the constant development of further organizing capacity.

ATU 192’s contract is unusual in several ways. They are only the second transit local in the state of California to receive hazard pay (denominated “appreciation pay” in the contract). The first, ATU 265, ran a parallel rank-and-file campaign with ATU 192 for hazard pay, and its members frequently supported ATU 192’s demands at board meetings and the rally. Some workers are rankled by the failure to call hazard pay by its true name; as organizer Sultana Adams notes, “Words matter and we have been risking our health since the beginning of the pandemic. We were out there every single day when there was no vaccine, no mask requirement, and very little information about COVID-19… except that it could possibly kill us.” But they also recognize that, without the pressure mounted by the hazard pay campaign over many months, and the constant organizing by rank-and-file workers, it is inconceivable that this extra pay would have been awarded by AC Transit. 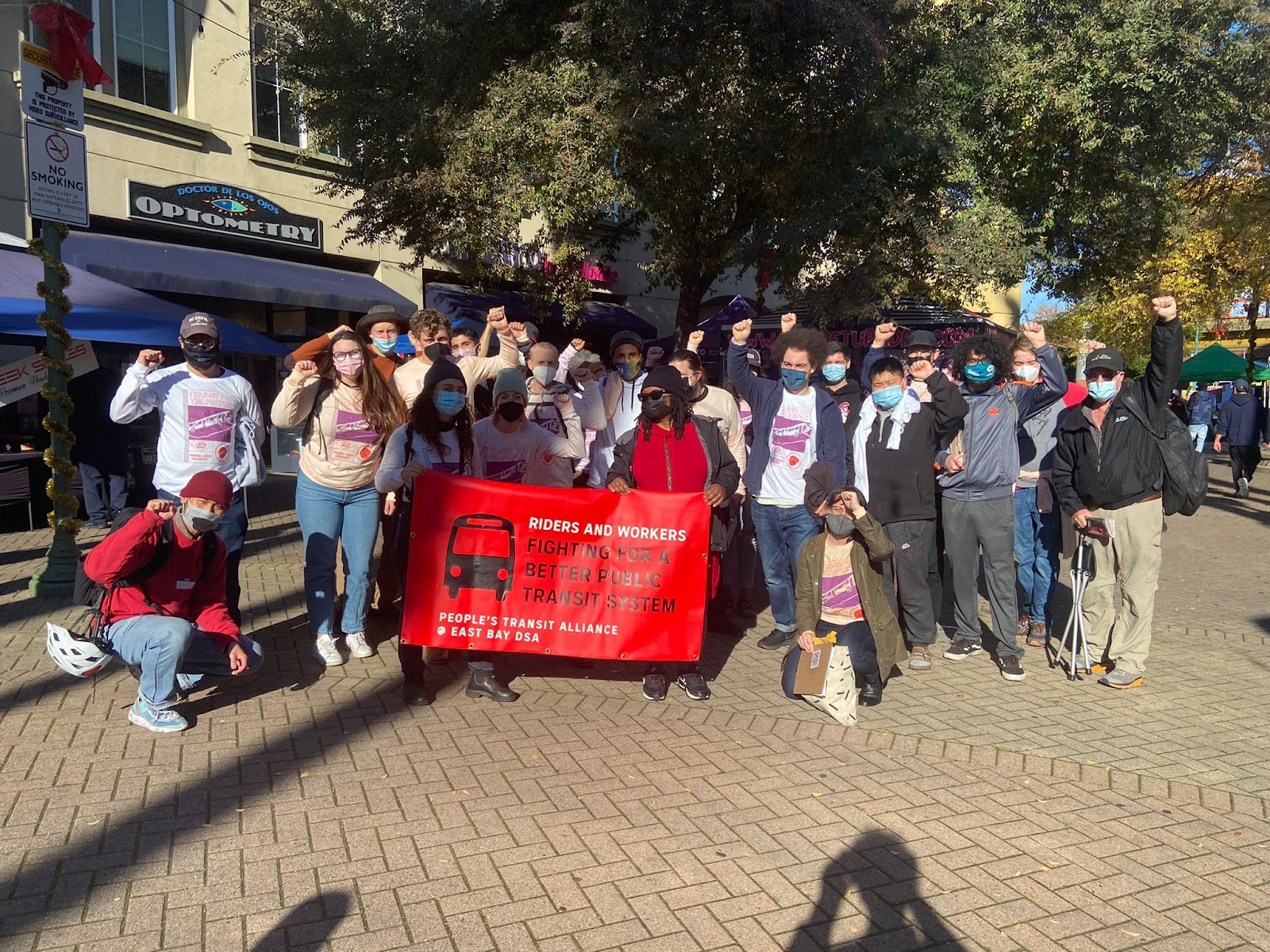 The outcome of the hazard pay campaign was not just an “appreciation pay” bonus of up to $4,000 per member, but a no-concession 3-year contract with a 10% pay increase over three years, and a $2,000 signing bonus for each member. This offer by AC Transit stands in stark contrast with bargaining campaigns in previous years, which have been difficult and drawn out by management. It is also a departure from recent bargaining campaigns by other transit locals, which have been hard fought by management.

The hazard pay campaign is also unique in that workers and riders struggled together to build power and win these concessions from AC Transit. Both groups came together to demand that AC Transit use its $116 million reserve of American Rescue Plan Act funds to restore service levels, to cut fares, and to provide hazard pay. By organizing both workers and members of the community that ATU 192 serves, the campaign expanded the base of support and provided a greater show of force at board meetings and rallies. In the longer term, this partnership has also forged connections between workers and the riders they serve, developing a greater understanding of the overlapping struggles that workers and riders face, while simultaneously building community amongst the ATU 192 workers. 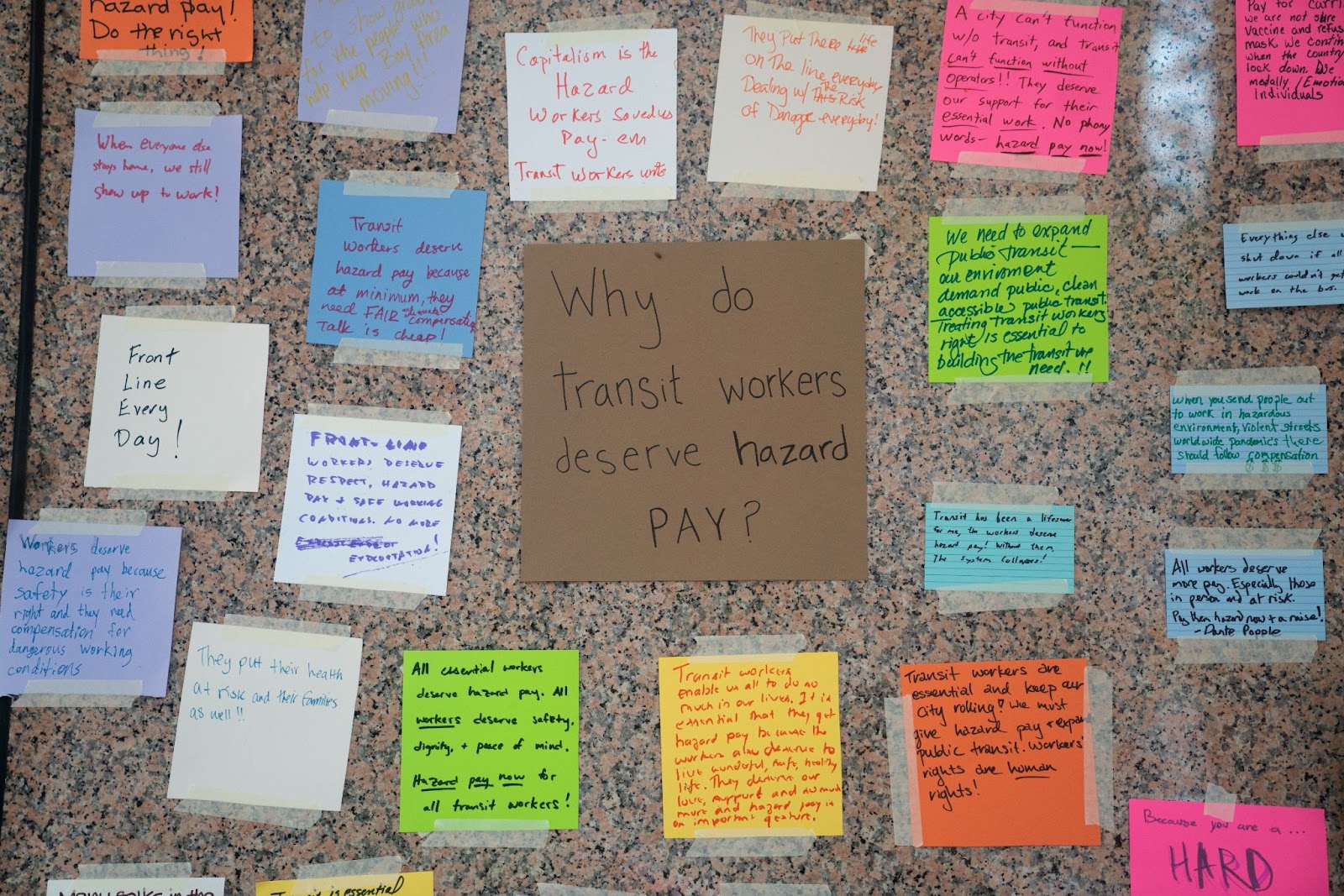 The successful hazard pay campaign has also highlighted the importance of establishing connections among regional transit locals, and with unions in other sectors. ATU 192’s sister local in San Jose, ATU 265, also secured hazard pay and a new contract, after several months of organizing in solidarity with ATU 192. Solidarity across sister locals not only helped to bolster numbers at rallies and board meetings, but developed a strong sense of comradery among the workers. These connections strengthened their respective struggles for hazard pay, and now serve as an ongoing basis of support as organizing work continues. And after the Oakland teachers’ union supported ATU 192’s campaign, teacher and bus rider Vilma Serrano-Bautista invited ATU’s Sultana Adams to speak at a city hall rally against school closures in March, building deeper solidarity.

The People’s Transit Alliance has inspired other efforts around the country to build solidarity between transit workers and their riders—including workers and DSA chapters in LA, New York City, and Miami—where efforts are underway to link transit workers and riders in struggle for the transit systems that we deserve. Drawing inspiration from the hazard pay campaign, an upcoming event at UCLA’s Luskin School of Public Affairs, for instance, will bring together operators at LA Metro with riders from the LA Bus Riders Union for a public meeting on “Democratizing Community Transit” on May 18.

Public transit is a vital public service that low-income and working class people rely on throughout the East Bay and beyond. As the COVID-19 pandemic has brought into stark relief the inequalities and contradictions of capitalism, and inspired worker militancy across the country to organize for better working conditions, ATU 192’s success is evidence of what rank-and-file workers can accomplish when they come together to demand the respect we all know they deserve.The work of ATU 192 and the People’s Transit Alliance is ongoing. Rank-and-file transit workers are participating in a cohort with organizers from East Bay DSA in Jane McAlevy’s Organizing 4 Power training, which started this month. Reach out to Pta@eastbaydsa.org or check out http://peoplestransit.com to get involved, and start fighting for the transit system that we deserve!