One union’s century-long fight for justice

On June 19, dockworkers shut down all 29 West Coast ports in a mass protest against the killing of George Floyd and other Black Americans. The action appears to be the first work stoppage by an international union on Juneteenth, a day that commemorates the actual end of chattel slavery in the United States, two years after the Emancipation Proclamation was signed.

At the center of the shutdown was one of the country’s most powerful and radical unions — the International Longshore and Warehouse Union (ILWU). As the people who run the entry point for trillions of dollars worth of goods entering the United States each year, the longshore workers have enormous leverage. They have used that to fight for justice for over 80 years. Its members emphasize the way economic and social justice are inextricably intertwined.

“You can’t have capitalism without racism. They go together like a hand and a glove,” said Clarence Thomas, a recently retired, longtime dock worker and former Secretary Treasurer of ILWU Local 10 San Francisco, during a speech in front of Oakland City Hall on Friday.

The union was born of Bloody Thursday and San Francisco’s general strike in 1934. Its founder Harry Bridges — an Australian immigrant who lived in San Francisco for decades — built the union on a foundation of racial unity that it has never abandoned. Since then, the ILWU and Local 10 in particular have been at the forefront of progressive labor unionism in America. 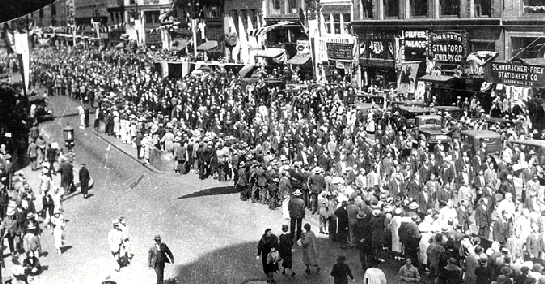 Through the 1920s and early 30s, men stood on street corners in cities around the Bay Area, begging for work. Unemployment was high and it was common for employers to engage in extortion, racketeering, and discrimination. At this point, the longshoremen were part of another union called the International Longshoremen’s Association (ILA), the union which still represents longshore workers in the rest of the country. In response to discriminatory and unstable hiring practices, longshoremen went on strike on May 9, 1934. As the strike wore on and made more of an impact on San Francisco’s economy, strikebreakers grew increasingly violent.

In July, thousands of striking workers in San Francisco were met by violent police who used tear gas and guns. On July 5, a day that became known as Bloody Thursday, two plainclothes police officers fired into a crowd outside of San Francisco’s union hall, killing two workers: Howard Sperry, a longshoreman and veteran of World War I, and Nicholas Bordoise, a line cook volunteering in the strike kitchen. Police killed six men in cities across the West Coast over the course of the strike.

“The inception of our union was a direct result of the San Francisco Police Department killing two strikers back in 1934 when the dock-workers here in San Francisco were fighting for the right to have a union hall, which would get rid of discrimination bosses choosing their workers of choice. This would affect minority groups,” said Trent Willis, president of ILWU Local 10.

Today, we are no strangers to police violence against protesters. Huge crowds supporting the Black Lives Matter movement have similarly been met by police brutality. The connection is not lost on ILWU members, who commemorate Sperry and Bordoise as union martyrs every year and today stand up to contemporary police brutality.

“All of these issues are connected by one common cause: poor people and working people often have to sacrifice life and limb in order to gain the necessities of life and the things in life that should be a human right, in order to force a capitalist system into recognizing what people need to survive,” Willis said.

Sperry and Bourdoise were honored in a massive funeral procession, with 12,000 people marching behind the coffins down San Francisco’s Market Street. The procession garnered crucial support for the striking longshoremen. Angered by the police brutality, workers in unions across the city began to organize their own strikes. Restaurants began to shut down, taxi drivers refused to take any passengers, cleaners closed their doors.

Eventually, all but two unions in San Francisco joined the general strike. The strike was a success, improving wages and working conditions and establishing a union hiring hall that ended discriminatory hiring practices. The 1934 strike was victorious because the longshore workers won broad support and sympathy from the public. That majority support gave them tremendous power with elected officials, up to and including President Roosevelt.

Three years later, the longshoremen split off from the more conservative ILA to form the ILWU.

Racial solidarity from the beginning 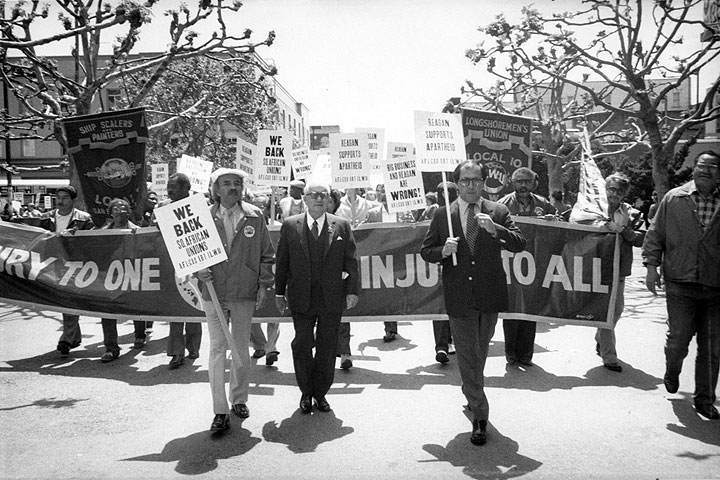 Though Black workers were allowed in the ILA in 1918, putting an end to racial oppression requires more than a policy. In the 1920s and 30s, bosses at the Ports of Oakland and San Francisco pitted white and Black dockworkers against one another. Bosses took advantage of racial division, employing Black workers to break up picket lines. This strategy and a climate hostile to organized labor in general kept unions relatively weak; prior to 1934, strikes had rarely been successful.

Union leader Harry Bridges realized that his union wouldn’t win the strike without the support of Black workers. He went to Black churches and community centers to make a case for the strike, promising Black workers an equal chance at jobs. The workers agreed; their support was instrumental to the success of the 1934 strike, and laid a foundation for racial unity that would be part of the union’s legacy for decades.

“To a great degree, the stance on inclusiveness goes back to Bridges and goes back to that great strike in 1934,” said Harvey Schwartz, a historian of the ILWU. “Harry Bridges insisted that you had to have Black workers invited into the union on an equal basis. And he made it stick. He had to argue with his membership at times, but he made it stick.”

Bridges would play an outsize role in shaping the values of the union in the decades to come. He was famously quoted saying, “If things reached a point where only two men were left on the waterfront, one would be a black man.”

Bridges served as president of the ILWU from its inception until 1977. During his forty-year tenure, the federal government filed four lawsuits against him for being an “alien radical communist”: two of those cases went all the way to the Supreme Court, according to Schwartz. The San Francisco local would see many different presidents over the years, but Bridges’ influence has always been strongly felt. San Francisco was Bridges’ home, and his legacy on the broader ILWU left its greatest mark on Local 10.

Bridges’ stance on racial unity and his commitment to progressive ideals would continue to attract leftist workers to the union. “Many of the earliest recruits were radicals of one type or another,” Howard Kimeldorf wrote in his study comparing the ILWU to other unions.

Black Americans found a home in the international union, which banned racial discrimination at its first convention in 1938, according to Willis. The union often defended Black workers against racism: in 1943, ILWU Local 10 found a naval officer guilty of racial discrimination after using a racial slur against a Black worker, and the union called for the officer to be court-martialed. Over time, Black membership grew in the union writ large and in the San Francisco local in particular, especially during the second Great Migration of African Americans away from the South. ILWU Local 10 eventually became a majority Black chapter, though it is one of few in the union. Its current members keep alive the union’s history of racial unity as a mechanism for fighting power.

“The only threat to people controlling society is to inject systemic oppression and system racism into society. If the powers that be can get one group of poor people to hate another group of poor people, it’s a good way to distract them. The ILWU learned its lesson about that in the 1930s,” Willis said. “People are sick of systemic racism — not just Black people. Everybody’s standing up against systemic racism.”

The ILWU is esteemed as one of the country’s most radical unions. But it wasn’t always that way.

“It’s a well-deserved but unfair reputation,” said Zack Pattin, a fourth-generation waterfront warker and ILWU rank-and-file organizer in Tacoma, Washington. “The truth is that there used to be hundreds of thousands of workers in unions that were just like that.”

The ILWU has always stood out in its commitment to devoting “its considerable economic muscle to efforts aimed at realizing larger political objectives,” writes Kimeldorf.

But a whole contingent of radical unions ran American industry for decades, ranging from auto workers to miners to maritime workers. The Communist Party had significant influence in many of those unions, especially those that emerged from the 1934 strike. “In the West, the 1934 strike gave rise to a distinct generation of workers whose loyalty to one another, including radical contemporaries like Bridges, rested on their participation in the violent conflict that reestablished unionism on the Pacific Coast,” Kimeldorf writes.

Those unions all but disappeared due to anti-Communist fear-mongering that started at the end of World War II. When the Congress of Industrial Organizations expelled eleven unions for their alleged affiliations with the Communist Party, only the ILWU’s membership and power remained relatively intact; other unions were subsumed by less militant, more conservative organizations. Under Bridges’ leadership, the union fought off raids and maintained its militancy.

Using labor tactics to fight for justice is not new to the ILWU, but it is for a generation that grew up being spoon-fed photographs of Civil Rights Era marches. At Friday’s rally in Oakland, filmmaker Boots Riley explained the power of strikes to a mostly young crowd. Riley said that when people asked him what to do next for #BlackLivesMatter, he pointed toward labor organizing.