On Monday, November 14, 48,000 academic workers at the University of California will begin an open-ended strike. Locals of the United Auto Workers (UAW) announced earlier this month that over 36,000 members voted by 98 percent to authorize the strike. In addition to seeking improved wages, benefits, and working conditions (including class size reduction, expanded parental leave and childcare, and protections from workplace harassment), the workers are pressing for a set of common-good demands that include affordable housing, free transit, actionable anti-bullying, anti-harassment, and anti-racism measures, and supports for immigrant workers and workers with disabilities.

These academic workers span all ten UC campuses, including UC Berkeley, UCSF, and the Lawrence Berkeley National Lab here in the Bay Area. The sheer size and scope of the strike could make its impacts felt in the state capitol, and nationally.

This strike has been decades in the making. While there are historical reasons why these academic workers are organizing within a union associated with industrial workers in the auto sector, the marriage of university workers and auto workers has given birth to a growing movement for democracy within the UAW.

When UC academic workers first organized they “were drawn to District 65, a ‘renegade union’ founded by Communists in the depths of the Great Depression,” writes labor scholar Barry Eidlin. “It had made a name for itself as a militant, grassroots union committed to organizing groups of workers who didn’t fit the mold of ‘traditional’ union members, particularly low-wage workers of color.” In 1987, District 65 merged with UAW. Local 2865 is today the second largest local in the autoworkers’ union.

Higher-ed workers now make up nearly a quarter of the 400,000 active UAW members. Strikes led by academic workers at New York University, Columbia, and Harvard were among the UAW’s largest strikes over the last two years. These workers have shared common demands for wage increases, improved health and childcare benefits, and third-party recourse against sexual harassment and discrimination on the job.

Militant strike actions waged by academic workers at NYU and Columbia in particular have succeeded in setting new industry standards regarding all three of these demands. These strikes revealed that the administrations of major universities will go to great lengths to avoid any concession to workers’ demands. Even more so, these hard-fought struggles demonstrated that when academic workers remain united against aggressive employer tactics and withhold their labor until their demands are met (for 3 and 10 weeks at NYU and Columbia, respectively), they have the power to win major improvements to their working conditions and students’ learning conditions.

Beyond the picket line, higher-ed workers have played a major role in the reform movement on the rise in the UAW. Academic workers across the country campaigned for the 2021 One Member, One Vote referendum initiated by the reform caucus Unite All Workers for Democracy (UAWD), whose success overturned the longstanding delegate system that prevented UAW members from directly electing union officials.

A year later, with the first direct election underway, higher-ed workers will have a voice in selecting the members of the International Executive Board, with campaigning often focusing on the future of academic workers in the UAW. Many in the northeast are campaigning for former-grad-student candidate Brandon Mancilla running for Region 9A Director on the UAWD Members United slate. This reform movement in Region 9A is building support for a sectoral bargaining strategy and generating rank-and-file organization across blue- and white-collar workers, a very promising model for bridging class struggle across workplaces.

Here in California, the rank-and-file energy has rooted itself in deep organizing around local demands over the past few years. Late last year, decades of organizing among student researchers at UC culminated in the university’s recognition of SRU-UAW. As two graduate student researchers wrote in The Nation, that campaign – like the current contract campaign – required a supermajority strike authorization vote, in which “10,890 of our coworkers voted by 97.5 percent to strike unless UC dropped its trumped-up legal objections to our union—and we won.”

Bargaining by academic workers with UC was kicked off by the post-doctoral workers in Local 5810. When they agreed to an extension of their expiring contract, and the non-faculty academic researchers did the same, all 48,000 academic workers were effectively united in a single contract struggle. “Lining up our bargaining timelines was absolutely critical to the power of our movement now” shared Tanzil Chowdhury, head steward of UAW 2865 and bargaining team member for SRU-UAW, “When you count the Postdocs, ARs, GSRs and ASEs together, the university really can’t function if all of us are out together, so it amplifies all of our power.” The unions developed their shared demands through a series of bargaining surveys, which confirmed what organizers had already learned from conversations with workers: that the cost of housing, the cost of living, and bullying were among the top issues.

With some workers living in their cars due to the cost of housing, a core demand is a living wage. The unions are seeking a 14 percent salary increase for academic researchers, a minimum salary for graduate and post-doc workers, and an annual cost of living adjustment (COLA).  Given that inflation was 7 percent last year and projected to be 8.2 percent this year, UC’s proposals – which offer annual raises of 3 percent for academic student employees and student researchers and 2 percent for academic researchers – would result in effective pay cuts for workers. As Tom Fraser writes in Jacobin, COLA clauses would both “provid[e] a short-term salve against temporary increases in the cost of living by guaranteeing wages will keep pace with expenses… [and] giv[e] insurance that future inflation will be accounted for at the moment it occurs rather than after the fact.”

As the joint “United for a Fair Workplace” website of the three UAW unions states, “This year, all 48,000 of us are bargaining four separate contracts with UC with the aim of making the University live up to its promise of being an engine of economic and social equity in our state. And for the first time, we are coordinating our contract campaigns so that all academic workers can overcome our unfair working conditions. We see our contracts as powerful tools we can use to ensure that academic workers are valued and empowered to fulfill the mission of UC as a truly public institution.”

Building Support for a Mass Strike

Organizers have been busy identifying organic leaders in each worksite and department, building up departmental organizing committees, and holding a series of structure tests. Rebecca Arwyn Lee, a postdoctoral researcher at UCSF Parnassus, describes a series of escalating actions starting this summer, when “postdocs, academic researchers, and student researchers at UCSF gathered in person and delivered a letter to the Executive Vice Chancellor in support of a postdoc colleague who was facing workplace bulling by a supervisor.” In the following weeks, Lee says, “hundreds of us workers at UCSF signed and sent an open letter calling on campus leadership to take action to address bullying at UCSF and promote a healthier research environment.”

Similar escalation campaigns were taking place across the ten UC campuses, building up to mass rallies in early October. The rallies culminated in inspiring votes by acclamation to hold a formal strike authorization vote. 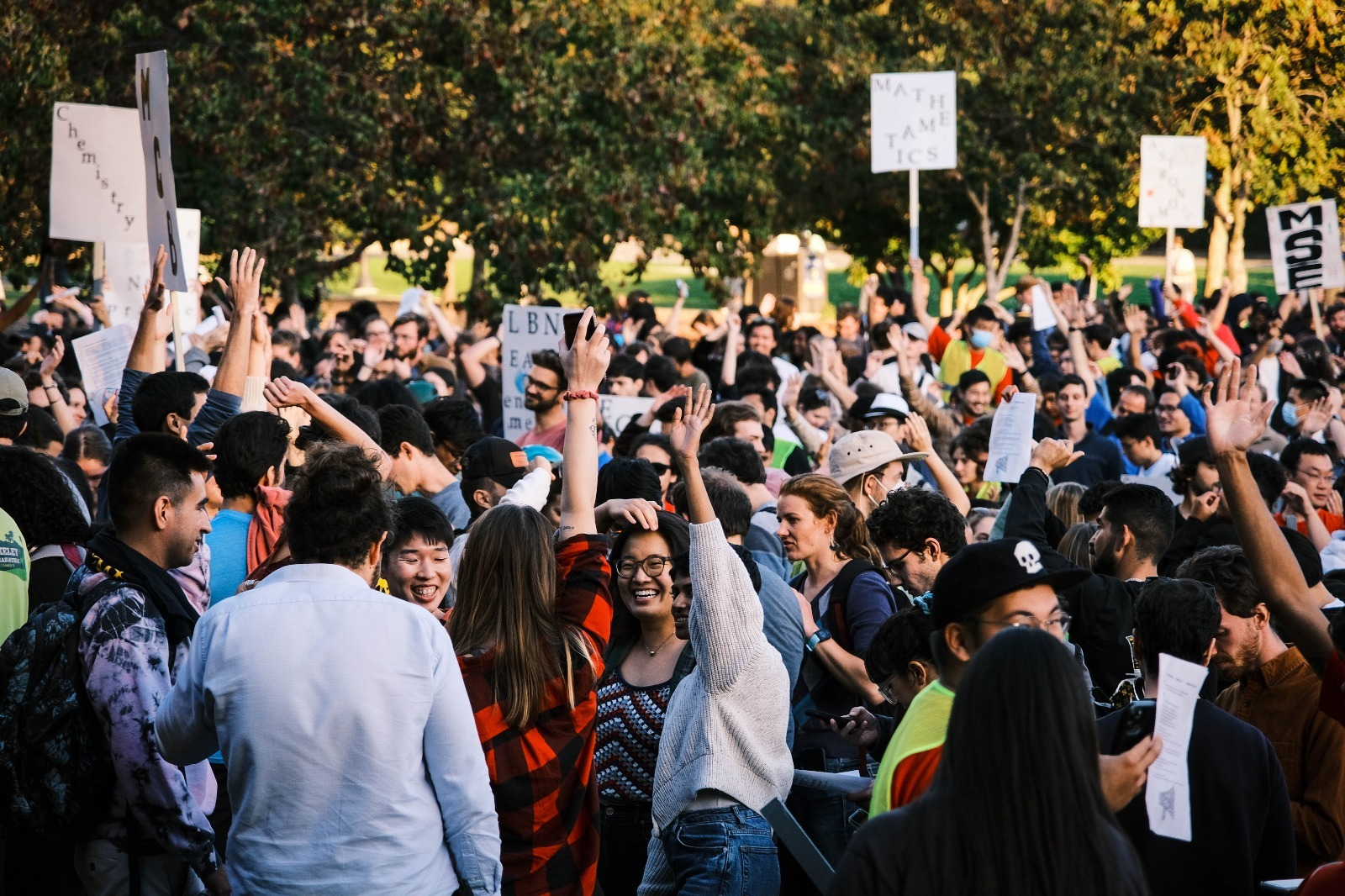 The unions have charged the university with a multitude of unfair practices.  UC has made illegal unilateral changes to working conditions (e.g., giving raises to some units that are denied to others), withheld information regarding compensation and bargaining unit membership, and unilaterally changed transit benefits. A total of 27 unfair labor practice charges, or ULPs, are currently pending against UC at state’s Public Employment Relations Board.

Voting to authorize the strike began on October 26, and ran for a week. By the time the last vote was counted, 98% of the 36,558 members voting authorized an open-ended ULP strike. Within days, leadership called the strike to begin on Monday, November 14.

The UC’s refusal to bargain a fair contract with UAW is just one example in a long list of austerity measures including tuition hikes and library closures. At the UC Berkeley campus, for example, the administration is set to close three libraries, simultaneously causing librarians to be laid off and research resources to be crammed into other already-overburdened libraries. While administrators such as Chancellor Carol Christ and Provost Hermalin receive raises on salaries already more than half a million dollars each, President Michael Drake was awarded a $6.5 million mansion from the UC. Yet tuition is set to raise 6% for each incoming cohort of undergraduates, while student services and resources for conducting research (by which UC Berkeley claims its prestige) are simultaneously being cut.

Organizing, and labor organizing especially, has once again proven to be the UC working class’s main avenue for fighting these austerity measures, just as we saw during  the lecturers’ union UC-AFT’s fight for a strong new contract last academic year. “Only labor has the unifying principles to create that long lasting, intersectional, sustainable movement that is so desperately needed if austerity practices are to be brought to their knees” expands Cal YDSA’s membership chair, Lauren Adams. In order to keep the University of California a truly public institution, we must fight for its accessibility and for strong protections for every employee on campus.

UC YDSA chapters across the state are already involved in organizing undergraduate solidarity strategies in order to let UC administration know that students are ready to stand with academic workers and refuse to cross the picket line. While strategies of support by YDSA chapters are varying across the UC, the goal is the same: demand that the UC bargain in good faith and recognize the demands of UAW workers. SRU-UAW field organizer and YDSA National Coordinating Committee member Taylor Clark illustrates how cross campus coordination has been a powerful organizing tool, “Coordinating strike support across UC campuses for the largest strike in the history of higher education clearly demonstrates the increasing power and capacity of YDSA as a national socialist organization and is a product of our conscious efforts to connect the socialist movement directly to workers in struggle, it’s an important and encouraging step for our movement.”

Undergraduate student organizers at UC Berkeley’s YDSA have been working closely with Tanzil Chowdhury and have put together a letter of support which fellow undergrads can sign onto. The letter contains a pledge that students will not be crossing the picket line and will be sent to UC President Michael Drake before the start of a strike. The petition currently has just over 7,000 signatures (and growing!) and is now being circulated by other UC-campus YDSAs. UC Berkeley YDSA’s labor committee has led students in organizing workshops, teaching general membership how to conduct one-on-one conversations with their peers, give class raps to mobilize fellow students, and coordinating art builds, picket shift sign ups, and flyering efforts. YDSA chapters across the state have begun tackling the 7,000 name list through phone and text banks to turn out fellow undergraduates to picket lines and refuse to attend classes during the strike.

California DSA is helping coordinate solidarity work across the campuses. Last week, CA-DSA issued a solidarity statement, noting that “By bringing forward a transformative vision that takes aim at the crises of extreme wealth inequality, the capture of the state by powerful private interests, homelessness and the dire shortage of affordable housing, and climate change, UC’s academic workers are fighting for a better future both for themselves and the entire multiracial working class.”

Meanwhile, the California Federation of Labor is circulating a petition in support of the workers’ demands.

East Bay residents and workers are encouraged to sign up to provide picket line and other support, and to donate to the strike hardship fund. The UC Berkeley picket schedule and locations are available here.

Eva Schultz is the chair of the Labor Committee at Cal YDSA. Becca Roskill is a member of DSA, and was a student worker and member of the bargaining committee during the strike at Columbia University this past year. Richard Marcantonio is a member of East Bay DSA and co-chairs the UC Labor Solidarity Working Group of California DSA.